The squid jig sector is still currently a 100% commercial sector, as it has been since 1985 and is based in the Eastern Cape with the bulk of the fishing occuring between Plettenberg Bay and Port Elizabeth. The bulk of the employees and industry supported by the sector are therefore from the Eastern Cape. 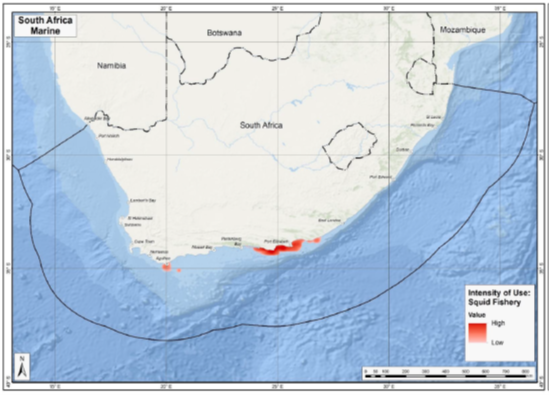 The squid sector is mainly made up of SMME companies, with 79 rights holding entities who between them operate 123 vessels with 2,451 crew. There are only 3 listed companies involved in the sector and they together own less than 20% of the permits.

It is capital intensive and has been on a continuous improvement programme since its inception. The entire sector converted from ice to freezer vessels during the 1990’s and there is still a steady upgrading and building of new vessels, which provides work to the South African boat-building sector who have produced over 90% of the vessels utilised in the sector. The total replacement cost of the 123 vessels in the sector is in the region of R1.5 Billion currently and a new 30 man freezer vessel costs in the region of R20m. 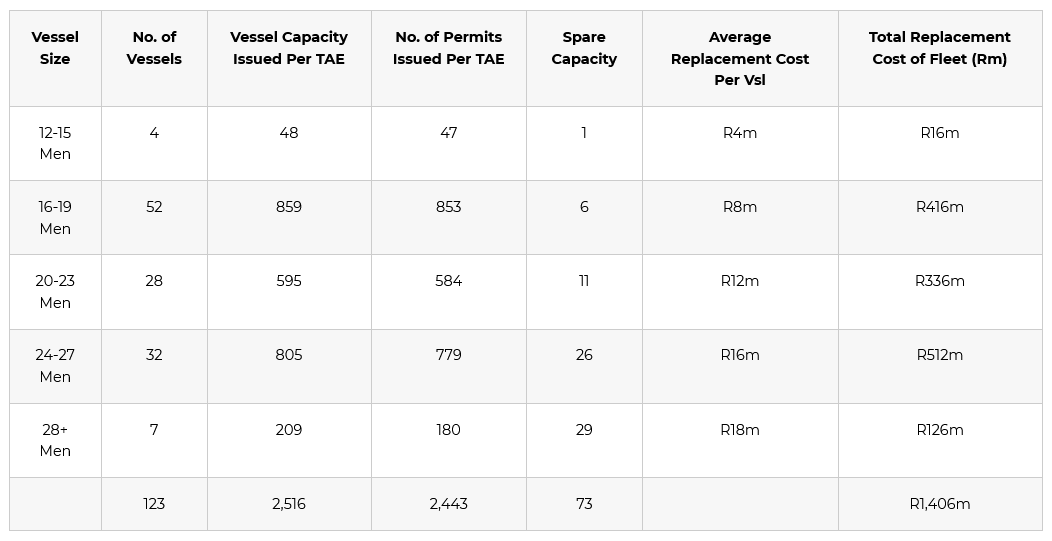 The squid sector is labour intensive, with each squid being caught by hand. It employs 2,451 crew on board the 123 vessels and approximately 550 land-basedsupport staff. Each employee may support an average of 5 family members, so there are between 15,000 and 20,000 people relying directly on the fishery. Crew are remunerated according to their individual catches which do fluctuate from year to year.

The labour side of the sector is managed through a Statutary Council – SCSI – where the industry and unions agree on Minimum Conditions of Employment and Minimum Wages.

The sector only started in the 1980’s and was regulated from 1985 onwards. It was not that transformed in 1994, but followed a process of transformation in the period from 1994 to 2001 by which time the transformation level (black ownership) had reached 33% when medium term rights were allocated.

The transformation process continued over the next 20 years with the black ownership of the sector increasing to 48% by 2005 and then further to 62% in 2013. We expect the overall black ownership will have increased further since then, but that will only be confirmed when the next Fishing Rights Allocation Process is completed later this year.

There was also a consolidation of rights holders with the number of companies reducing from 127 in 2000 to 79 by 2020.

The squid sector is export focused, with 99% of South African squid being exported, mainly to Europe and the Far East.

The reason for this is that the species, Loligo Reynaudii, is the same as that found in the Mediterranean and Japan and it is in high demand in these areas. The price that can be achieved by exporting is usually 3 to 4 times what it costs to import alternative cheaper species of squid (calamari) which are consumed on the local market.

The entire viability of the local squid sector and its labour intensive catching methodology is underpinned by the fact that it is exported and achieves a much better price than the cheaper alternatives many of which are harvested in other parts of the world using trawl or automated jigging processes which require much less labour.

Signup to our newsletter for industry news and updates.

The core focus of SASMIA is to provide a two-way communication channel between government and the industry, and to fund squid resource research.
Twitter
Menu
Menu
Copyright 2021 All rights Reserved – SASMIA

Designed and Developed by Thiink Digital with ip Webcraft